A gentle giant, selfless, gracious, gifted, angel in human form. These were just some of the words used to memorialize the late John K. Niparko, MD, former Tiber Alpert professor and chair of the USC Tina and Rick Caruso Department of Otolaryngology – Head and Neck Surgery at the Keck School of Medicine of USC, who died April 25. He was 61. 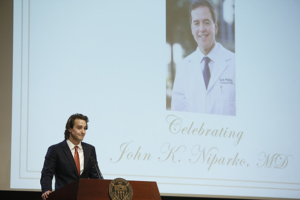 Kevin Niparko speaks during a memorial for his father, John K. Niparko, May 10 at Mayer Auditorium on the Health Sciences Campus.

On May 10, hundreds of faculty, family, colleagues and students filled Mayer Auditorium on the Health Sciences Campus to capacity, while dozens more stood in the vestibule at the memorial service for the internationally renowned otoneurologic surgeon and authority on implantable technologies.

USC President C. L. Max Nikias, PhD, Keck School of Medicine of USC interim Dean Rohit Varma, MD, MPH, university trustee Rick Caruso and his family, and patients of Niparko were among those who spoke about the impact he made in their lives and at USC.

President Nikias described Niparko as a remarkable human being and said, “perhaps nothing reveals the greatness of a physician more than his ability to blur the lines between the medical and the miraculous, and the dutiful and the devoted. To be under John Niparko’s care, to work alongside him, to witness his transformation of lives — it was an experience not forgotten.”

Nikias said just a short time after Niparko arrived at USC from Johns Hopkins University, he recruited a talented team that tripled in size and enlarged the otolaryngology department’s scope, broadening its subspecialties as well as surgical expertise. “His unbounded compassion and dedication to giving children a successful future would attract the support of our trustee Rick Caruso and his wife Tina.”

Caruso described meeting Niparko after seeing several specialists in search of treatment for his daughter Gianna, who was born with mild to moderate hearing loss.

“I remember our first meeting well. John greeted me with a firm handshake, a soft voice, and a sense of comfort and quiet confidence. We as a family knew right away we were in the hands of not just an expert, but an incredibly kind and gentle man.”

Caruso said he and his family will always remember the day Niparko moved them to tears of joy. “That was the day that he gave Gianna the gift of hearing. More than 14 years we had gone from doctor to doctor, from appointment to appointment, searching to get her the experience of the full sense of sound. It was John who provided a miracle, we will never forget that day.” 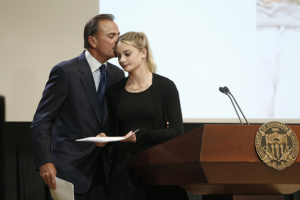 Rick Caruso comforts his daughter Gianna after she spoke at a memorial for John Niparko, held May 10 at Mayer Auditorium on the Health Sciences Campus.

Gianna Caruso fought back tears as she described Niparko as not only her doctor, but as a family member and friend.

“Today we are here to honor an amazing man who changed my life, the way I view life and the way I live life,” she said. “Dr. Niparko gave me the gift of hearing. I believe he was an angel sent down by God to change not only my life but the lives of many others.”

Varma, who also is the director of the USC Gayle and Edward Roski Eye Institute, said Niparko stood out among the incredible group of scientists and physicians at USC. “In part, this is because of his wide range of skills as a gifted physician and a scientist and an innovator, and his ability to lead and inspire. Even during his all-too-brief time here in L.A., it was his leadership that elevated the Caruso Department of OHNS into one of the best in the United States. But John also stood out because of his uncommon humility and humanity.”

A native of Detroit, Niparko received his bachelor’s degree and medical degree with distinction from the University of Michigan. He joined USC in 2013 and served a two-year term as president of the USC Care Medical Group and also held the presidency of the American Otological Society, the most prestigious organization of his specialty. His acclaimed expertise was instrumental in attracting more than 30 new clinical and research faculty members.