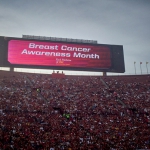 Video board atop the Coliseum.

To honor Breast Cancer Awareness Month, a team of physicians and staff from Keck Medicine of USC joined cancer survivors on the field during the Oct. 24 USC Trojan football game against Utah.

During the break at the end of the first quarter of play, a video about breast cancer was played on the giant video screen inside the Coliseum and the crowd recognized a group of  doctors and their patients on the field with a standing ovation.

It was an “awesome moment,” said one of the organizers, Nick Cartan, director of business development for USC Sports Properties.

Earlier on game day, two Keck Medicine of USC physicians, Stephen F. Sener and Christy A. Russell, were interviewed during a pre-game segment on ESPN710 by announcers John Jackson and Steve Mason. The doctors spoke about breast cancer awareness, treatment and prevention options.

In all, about 100 people from USC showed their support during the event by wearing special black or pink shirts adorned with the pink ribbon logo that is associated with the fight against breast cancer. The commemorative t-shirts are available for sale at USC bookstores. 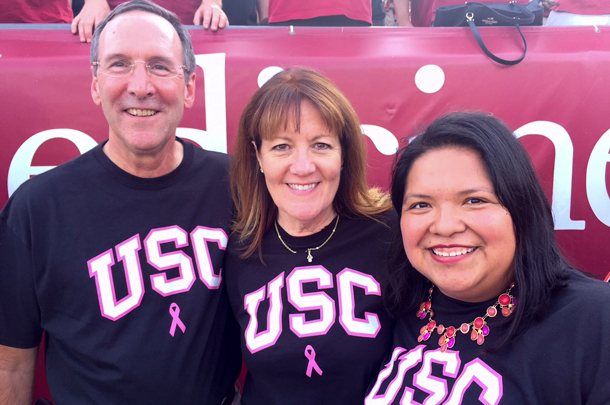 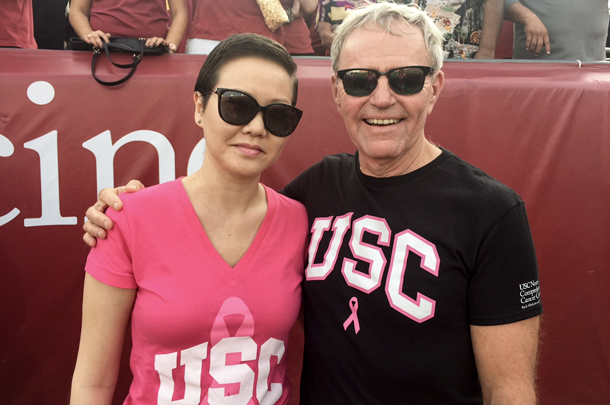