David R. Hinton, M.D., professor of pathology, neurological surgery and ophthalmology at the Keck School of Medicine of USC, has been named the school’s inaugural associate dean for vision science. Hinton is a distinguished scientist and educator, and one of the world’s foremost experts on the biology of macular degeneration.

Hinton will spearhead the development of new vision science programs in education, training and research. He will also be responsible for coordinating vision research efforts that are located throughout Keck School departments, and between the Keck School and other departments and schools at USC. 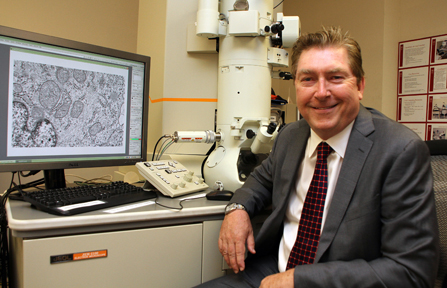 As associate dean for vision science, Hinton will spearhead the development of new vision science programs in education, training and research.
Photo/Jon Nalick

“Dr. Hinton’s breadth of knowledge, area of research, commitment to patient care, and leadership roles make him an ideal choice,” said Carmen A. Puliafito, dean of the Keck School of Medicine. “His knowledge and prominence as a researcher converge remarkably with our efforts to provide the finest eye health care in the world.”

“The Keck School of Medicine and the USC Eye Institute are committed to recruiting transformational vision scientists to our university,” Puliafito added.

Hinton has been involved in vision research since his residency at the University of Toronto, where he also received his medical degree in 1978. His longstanding interest in the response of the outer retina to injury and its role in blinding disorders such as proliferative vitreoretinopathy (PVR) and choroidal neovascularization (CNV) has contributed significantly to the understanding of the basic mechanisms of disease and to the development of novel therapeutic approaches to those disorders. In recent years, he has focused on the pathogenesis of age-related macular degeneration, and the roles of cytokines growth factors and small heat shock proteins on the function of retinal pigment epithelium. His most recent work examines the development of a stem cell-based treatment for age-related macular degeneration.

In 2009, Hinton and Mark Humayun, professor of ophthalmology, cell and neurobiology, and biomedical engineering at the Keck School of Medicine and the USC Viterbi School Engineering, received a nearly $16 million grant from the California Institute of Regenerative Medicine (CIRM) to fund the development of a stem cell-based treatment for age-related macular degeneration, the leading cause of vision loss and blindness among the elderly.

Hinton said he is excited to be named founding associate dean and honored by the appointment. “Understandably, there’s much optimism about eye research in the 21st century,” he said. “Stem cell therapies have the potential to allow us to restore vision that has been lost, and neuroprotection can be used to protect against retinal cell damage. The Keck School is uniquely positioned to lead these kinds of research efforts, due to its tradition of innovation and excellence in education, research and patient care.”

Hinton said his primary goal will be to develop “a community of vision researchers who will work together to advance education and research at the Keck School and elsewhere within USC.”

Hinton is an author or co-author of more than 300 peer-reviewed papers and has served as a member of the editorial boards of Investigative Ophthalmology and Visual Science since 2007, Chinese Journal of Experimental Ophthalmology since 2011, and Biomedical Research International since 2013.

As an educator, Hinton has received numerous awards for teaching both undergraduate and graduate students. He was named a Master Teacher of the Keck School of Medicine in 2008. In 2009, he was elected a Fellow of the Association for Research in Vision and Ophthalmology. Known for his effective mentorship, Hinton has served as advisor to more than 30 MD, PhD, or MD/PhD students.