Exploring the connection between Alzheimer’s disease and stroke

Alzheimer’s disease is the No. 6 cause of death in the United States, and stroke is the No. 4 cause.

Helena Chui, MD, chair, Department of Neurology, Raymond and Betty McCarron Chair in Neurology, and professor of neurology and gerontology at the Keck School of Medicine of USC, recently gave a presentation on Alzheimer’s disease and its relation to stroke on Nov. 6 as the sixth lecture in an ongoing Stroke Seminar Series at the Rio Hando Community Center in Downey, Calif. The event was hosted by the Roxanna Todd Hodges Stroke Foundation. 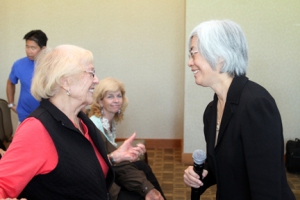 Helena Chui, MD, at the Keck School of Medicine of USC, interacts with an attendee at the Roxanna Todd Hodges Stroke Seminar Series after her presentation on Alzheimer’s disease and its relation to stroke.
(Photo/Raul Lozano)

Vascular brain injury is also associated with narrowing, inflammation, occlusion and rupture of blood vessels, Chui explained. “The vascular system is so vast that the total length of the capillaries in your brain is about 400 miles, which would stretch from here to Los Angeles to San Francisco,” she said. “Protecting our vascular health is the most important ways we can reduce the risk of stroke and other neurological conditions.”

Chui noted that several lifestyle modifications can be made to help reduce the risk of stroke and delay the onset of Alzheimer’s symptoms. These modifications include lowering cholesterol and saturated fat intake, quitting smoking, losing weight, limiting alcohol to less than 1 ounce per day, reducing sodium intake to less than 2.3 grams per day if high blood pressure is present, exercising aerobically, keeping mentally and socially active, and sleeping well.

“If we could delay the onset of symptoms by just five years, we could cut the prevalence of Alzheimer’s disease by half,” Chui said. “At USC we focus on trying to develop solutions that are designed to have the best preventive effects without increasing the risks of other diseases.”

The Roxanna Todd Hodges Foundation is dedicated to spreading awareness about stroke risk factors and prevention, and provides stroke survivors and surrounding communities with education and support.