‘Addiction in Dreamland’ event pulls back curtain on opioid epidemic

The opioid epidemic has become a public health crisis with devastating consequences felt by individuals, families and communities. In fact, Americans are now more likely to die of an opioid overdose than in a vehicle crash, according to the National Safety Council. A Monday, Jan. 28 event in USC’s Doheny Memorial Library, “Addiction in Dreamland: A Conversation with Sam Quinones,” gave context to the multiple forces that contributed to what is now one of the worst drug epidemics in American history.

The event was presented by USC Visions and Voices, a university-wide initiative that brings the community together through music and dance performances, film screenings and lectures, and organized by the USC School of Pharmacy.

“When I was writing the book, I had a feeling that no one would read it,” Quinones said. “There was a lot of secrecy around opioid addiction and overdose at the time, so it was hard getting people to talk to me about the topic.” 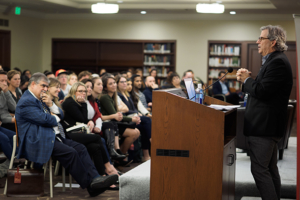 In just a few years, though, there has been a huge cultural shift: the opioid crisis consistently dominates national headlines. Quinones’ book, published in 2015, is now more relevant than ever.

Quinones pinpointed the start of the crisis to the 1980s, when there was change in the heroin market and the synthetic opioid fentanyl became popularized.

“Then you had doctor evaluations asking patients whether the doctor treated their pain,” Quinones said. “Essentially, these evaluations became a lever for extorting pills from doctors.”

All of these factors coincided with Americans settling into a “quick fix” society — one that seeks immediate solutions for problems.  However, believing that there was a simple solution to a complicated problem like pain contributed to skyrocketing rates of addiction, the author explained.

The conversation portion of the event was moderated by Melissa Durham, associate professor of clinical pharmacy at the USC School of Pharmacy, who established a pharmacist-run pain medication management clinic at the USC Pain Center.

“Patients on long-term opioid therapy are now scared they won’t be prescribed the medication they rely on because of policy changes cracking down on opioids,” Durham said. “What’s the solution? How do we find a balance?” 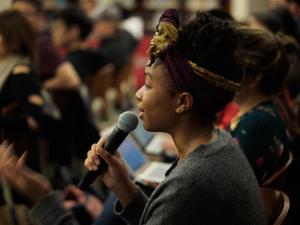 Quinones acknowledged the tough position some patients are put in: “I feel strongly that some people need opioids, and I feel for them.” He took a long pause before continuing, “Pain treatment is an art as much as it is a science, and medical professionals and patients need to work together to find an appropriate treatment plan.”

After first-year PharmD student Michelle Kalu finished reading the book, she said she was left wondering what role research should play in tackling the opioid crisis.

“We can use research money to rebuild communities in the U.S. where people feel forgotten and neglected,” Quinones answered. “If we’re going to solve anything, we need to bring these people back into the fold.”