Librarian Honored for Contribution to Division of Biokinesiology and Physical Therapy 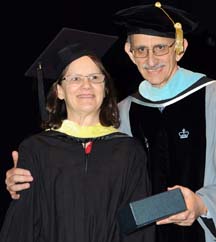 After devoting more than 30 years to USC, Pamela Corley retired in 2013 from her post at the Norris Medical Library. For her contribution, the Division of Biokinesiology and Physical Therapy honored her with the Division Tribute award at its commencement ceremony on May 17.

“Her official title is information specialist,” said James Gordon, chair of the division, of Corley, who was the liaison for the division at the Norris Medical Library. “That title, however, does not begin to express who Pam Corley is, and what she does. I like to think that her real title should be information therapist.’”

According to Gordon, Corley never limited her role as a librarian to pointing the way to the right book among the stacks or showing people where the journal articles were kept. Instead, she charted a path that made her a critical resource for the faculty and students in the Division of Biokinesiology and Physical Therapy.

Corley was known to have made it her mission to keep on top of new informational services and programs that could be of use to the division. She was an early adopter of technology, first using a personal computer to conduct information searches in 1981. She began teaching division faculty and students how to use personal computers for literature searches in 1983. And, rather than waiting for division faculty and students to approach her for help, she went to them.

Gordon noted that Corley attended faculty meetings and retreats to share her findings and help the faculty understand how these new resources could make them better clinicians, teachers and researchers. She often held one-on-one sessions with faculty and students so that she could find out the specific information that would be helpful to them and to walk them through the ways to find it.

“She has been especially helpful in keeping us informed about the dizzying developments in mobile and PDA technologies,” said Gordon at commencement. “Not only does she help students and faculty to use and access critical information, but she alleviates their anxieties and actually makes people feel good about it.”

She lectured frequently to medical groups and librarian organizations on the subject of health care resources on the Internet and has published numerous articles on subjects pertaining to information resources available to medical professionals.

When Corley shared her plan to retire at a faculty meeting, Gordon said many were dismayed at the prospect of losing such a key player in the division.  “We need to acknowledge the essential role she has played in our success. We need to honor her for her contributions to our division,” said Gordon. “Most important, we need to say, ‘Thank you.’”