Los Angeles residents Selim Zilkha and Mary Hayley are raising the stakes in the fight against Alzheimer’s disease, the only cause of death among the top 10 in the United States that cannot currently be prevented, cured or slowed.

Zilkha, a member of the Keck School of Medicine of USC Board of Overseers, has pledged a gift of $5 million to the school to fund a new endowed chair in Alzheimer’s disease research. This latest gift brings Zilkha’s total giving to neuroscience research at the Keck School to more than $30 million.

“We are deeply grateful to Selim and Mary for their vision and support,” said Carmen A. Puliafito, MD, MBA, dean of the Keck School. “Through their extraordinary philanthropy and outstanding leadership, they are helping to support prolific and groundbreaking research in degenerative neurological diseases.”

Alzheimer’s is a degenerative brain disorder that leads to memory loss and changes in thinking and other brain functions. Today, more than 5 million Americans suffer from Alzheimer’s disease, the sixth leading cause of death in the United States, according to the Alzheimer’s Association. 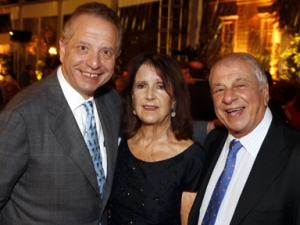 “My mother and eldest brother suffered from Alzheimer’s, and later my eldest sister from dementia,” said Zilkha. “These are terrible diseases. If we don’t do something about it, by 2050 the number of people in the United States with Alzheimer’s or dementia may nearly triple from 5 million to a projected 13.8 million. We must make every effort to arrest and reverse this progression.”

An owner in Zilkha Biomass Fuels, Zilkha is known for the breadth of his vision both as an innovative and successful entrepreneur and as a medical benefactor.

Zilkha established the Zilkha Neurogenetic Institute (ZNI) at USC with a $20 million gift to the Keck School in 2002. He reaffirmed his commitment to Keck Medicine’s research efforts in 2011 with a $5 million gift for recruitment of senior scientists and investigators to the institute. This latest gift establishes the Mary Hayley and Selim Zilkha Chair for Alzheimer’s Disease Research to directly support and advance research efforts into the causes, treatments and understanding of Alzheimer’s disease.

ZNI Director Berislav V. Zlokovic, MD, PhD, professor and chair of the Department of Physiology and Biophysics at the Keck School, has been named the inaugural holder of the chair.

Zlokovic is an eminent scientist-clinician whose research has focused primarily on the relationship of vascular problems to Alzheimer’s disease. He was a pioneer of the concept that linked impaired blood flow and flaws in the blood-brain barrier to the development of diseases such as Alzheimer’s through their impact on neurons. He is currently the principal investigator for numerous grants, including two National Institutes of Health-funded R37 awards to study pathogenesis and new therapeutic targets in Alzheimer’s disease.

“Professor Zlokovic’s translational research in neurodegenerative disorders and the blood-brain relationship is forging a promising path toward the discovery of cures for debilitating health problems that affect millions of people,” said Elizabeth Garrett, USC provost and senior vice president for academic affairs. “His influential work at ZNI will continue to advance through the generous support provided by Selim Zilkha and Mary Hayley in establishing this endowed chair.”

“Since the National Alzheimer’s Project Act was signed into law in 2011, we now have a plan that intends to prevent and effectively treat Alzheimer’s disease by 2025,” Zlokovic said. “We hope that our research will contribute to that goal by paving the way for development of new treatments and early diagnostics for this devastating disease.”