John K. Niparko, MD, has been appointed to the position of president of USC Care Medical Group. Niparko will serve a two-year term, which began on July 1. He succeeds Edward Crandall, MD, chair of the Department of Medicine, who also served a two-year term.

Also the recently appointed chair of the Department of Otolaryngology-Head & Neck Surgery at the Keck School of Medicine of USC, Niparko joined USC from Johns Hopkins University, where he was the inaugural George T. Nager Professor and director of the Division of Otology, Neurotology and Skull Base Surgery. 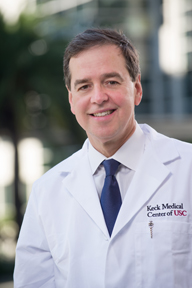 Niparko received his bachelor’s degree and medical degree with distinction from the University of Michigan, where he also completed his residency in otolaryngology-head and neck surgery and a fellowship in otology, neurotology and skull base surgery.

He is an author or co-author of more than 200 peer-reviewed papers and abstracts, 45 review articles and four books, among them Atlas of Skull Base Surgery and Cochlear Implants: Principles and Practices. He has served as editor-in-chief of the Journal of Otology & Neurotology since 2006.

“The role of the USC Care president is critical to achieving a high-caliber, thriving physician practice within the Keck Medical Center of USC,” said Tom Jackiewicz, MPH, senior vice president and CEO for USC Health. “In this role, Dr. Niparko will collaborate with leadership across the health-care enterprise, as well as connect the achievements of our practice into the greater University of Southern California academic and research communities.”