HSC celebrates as graduates step up to make their mark

It somehow all flew by in an instant. But here she was, after four years of medical school, receiving her diploma and officially becoming a doctor.

And as if it didn’t go by fast enough, Kaitlin Carroll was the first person called on stage to receive her diploma at the Keck School of Medicine of USC’s commencement ceremony May 18 at the Shrine Auditorium. 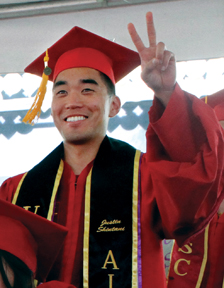 “It’s been eight years since high school,” said Carroll, who also served as the co-president of the student body. “It’s blown by.”

With more than 2,000 family members cheering and waving, the Keck School class entered the hall at the start of the ceremony. The class included 154 M.D. graduates, with three of them also receiving a Ph.D., one an M.B.A. and one an M.P.H.

It was one of several graduation ceremonies held during the week for students in various fields of study across the Health Sciences campus.

The newly minted doctors received a wide range of send-offs that were in turn solemn, poignant and funny.

Commencement speaker, and recipient of the Dean’s Humanitarian Award Robert K. Ross, president and CEO of the California Endowment, wove a story about a 2-year-old boy who was rushed to the hospital after being found in the bottom of a swimming pool. Ross was a resident at the time and got to know the family over the course of the boy’s treatment. The initial news was not good, and the family was offered the chance to remove the boy from his respirator. But they refused, deciding instead to hope for the best.

Ross lost touch with the family, but seven years later received a telephone call. On the other end was the young boy, who was then 9.

“I was talking to a miracle,” Ross told the audience.

And then Ross held up a photo. It was the boy at his high school graduation. Ross said the boy then went on to graduate from college. Ross used the story to ask the graduates to imagine things beyond science.

“This craft that you’ve chosen, never forget that it’s about healing and there is an element of that craft of healing that has to do with faith—faith in the power of unseen evidence,” he said. “It’s a reminder about those things that you just can’t measure. You can’t measure faith, attitude and courage.”

In his address, Keck School Dean Carmen A. Puliafito recalled how the Boston Marathon bombing occurred just weeks after faculty, staff and students from the Keck School and Keck Medical Center of USC volunteered at the Los Angeles Marathon. And while the event was a national tragedy, it was a time physicians could feel proud for rushing to the scene and putting themselves in danger to help the injured.

“Just a few seconds after the blast, we saw true heroism everywhere,” he said. “And physicians led the way. It was a great moment in the history of American medicine and something every one of us in the medical profession can be proud of.”

He then urged the class to take on the mantle of leadership in their careers.

“In moments of crises large and small, both communities and individuals look to physicians to lead the way toward healing,” he said. “It may be on the battlefield. It may be on the sidewalk. I know you’ll be ready for the difficult times ahead with both courage and compassion.”

Elizabeth Garrett, USC provost and senior vice president for academic affairs told the graduates that they possess knowledge that took previous doctors an entire career to master. And she urged them to put their expertise to good use.

“Your passion to help and comfort others is not just a passion anymore—it is also your responsibility,” she said.

And then it was time for some fun. Student speaker Nima Taheri seamlessly mixed pop-culture references with experiences from school for a comedic turn that had the audience laughing.

“I’d like to take this time to welcome our friends, our family and our loan officers for coming out to support us at this very special time,” he said. “This is to you, Wells Fargo.”

Taheri, who transferred to the Keck School from UCLA, had some advice for his colleagues.

Other ceremonies were also held throughout the week.

The Keck School’s Master of Science, Master of Public Health and Ph.D. students walked on May 15 in Pappas Quad.

On May 17, the Ostrow School of Dentistry of USC awarded 173 D.D.S. degrees, 32 bachelor’s degrees in dental hygiene, 46 advanced specialty certificates and one master’s degree in craniofacial biology.

At one ceremony, Pam Corley of the Norris Medical Library received the division’s tribute for her more than 30 years of service. Her retirement came on the same day as the ceremony.