Two special workshops on implementation of the HSC Master Plan and streetscape were held for community members on Aug. 3 and Aug. 8 at Hazard Park. The events were co-sponsored by the LA-32 Neighborhood Council and the office of Councilmember José Huizar.

“I believe that democracy is at its best when people come together, and I really do appreciate the fact that you are here,” said Martha Escutia, vice president, government relations for USC, who welcomed the crowd. “USC is your neighbor, and has been here for more than 100 years. USC is going to stay here for as long as possible because they have made a commitment to this community.” 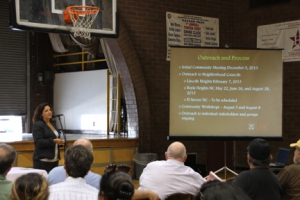 Laurie Stone, executive director of land use & planning, presents details of USC’s community outreach and the components of the Master Plan to community members at a workshop at Hazard Park on Aug. 3.
(Photo/Amy E. Hamaker)

Laurie Stone, executive director of land use & planning, gave a short presentation on plan implementation as part of a formal outreach process. The presentation included:

In addition to the extension, the university is investing significantly in the overall campus streetscape, with the underground placement of overhead utilities, sidewalk widening, more than 200 new street trees, new street lighting, decorative brick banding in sidewalks and crosswalks, and a comprehensive signage program.

Community comments centered on the Norfolk Street Extension, and the concern that current green space will be lost and traffic, noise and pollution will all increase. Speakers also suggested that USC work with the community to better determine needs for Hazard Park. After the open comment session, consultants and experts were available to answer individual questions from the public.

Craig Keys, associate senior vice president, civic engagement, thanked audience members for their comments and suggestions. “We need your comments and ideas to make this project work for both the university and the community,” he said.