New research to slow vision loss for macular degeneration patients has been funded at Keck Medicine of USC as part of the third round of the California Institute of Regenerative Medicine’s (CIRM) Disease Team awards. 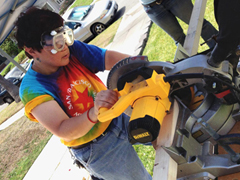 To many, do-it-yourself renovation projects can be a costly headache waiting to happen. But for occupational therapy student Donna Ozawa, it’s a real passion.

Ozawa has two decades of experience in disciplines including sculpture, design and wheelchair engineering. She received an executive certificate in home modification from the USC Davis School of Gerontology in 2012, and has worked with several professional and volunteer organizations to adapt home spaces to better fit residents’ needs.

Now a student in USC’s occupational therapy master’s class of 2015, Ozawa is pursuing a career that will allow her to seamlessly combine her experiences and interests to help people lead healthier, happier lives in their residences.

Valter Longo seeks clues to a long and healthy life

Valter Longo, PhD, is out to prove that gerontology is a young man’s game. The 46-year-old USC professor of gerontology and biological sciences has dedicated his career to slowing the implacable process of aging.

Growing up in Genoa, Italy, Longo spent countless hours emulating the guitar stylings of rock legends Jimi Hendrix and Mark Knopfler from Dire Straits. At age 16, he moved to Chicago to take jazz guitar lessons before heading to the University of North Texas to continue his studies.

During his second year of college as a music major, Longo was tapped to direct the marching band. As his music sensibilities were deeply rooted in rock, he refused, and the music department told him to find a different major. “Without hesitation, I said, ‘I want to learn about aging,’” he said.

After receiving his PhD in biochemistry at UCLA, Longo decided to take a molecular approach to aging, so he joined the UCLA labs of chemist Joan S. Valentine, PhD, and geneticist Edith B. Gralla, PhD. END_OF_DOCUMENT_TOKEN_TO_BE_REPLACED Read More »

On Dec. 18, 2013, Keck Medicine of USC became the world’s first medical center to surgically implant a responsive brain device newly approved by the U.S. Food and Drug Administration (FDA) to treat epilepsy, with the potential to help millions of people worldwide.

The device, manufactured by NeuroPace Inc., detects and then directly responds to abnormal brain activity to prevent seizures before they occur. In a three-hour surgery, USC faculty physicians implanted the device in a 28-year-old Lakewood, Calif., woman who was diagnosed with epilepsy in 2004.

Kathleen Rivas, an aspiring journalist who sought care from the university’s student health center in 2009 while earning her master’s degree elected to have the implant because medication had not fully controlled her seizures. Over the next few months, her doctors will program the device to detect specific brain activity indicative of a seizure’s onset. END_OF_DOCUMENT_TOKEN_TO_BE_REPLACED Read More »