Children are not as hard-headed as adults — in a very literal sense. Babies are born with soft spots and flexible joints called sutures at the junctions where various sections of their skull bones meet. If these sutures fuse prematurely, the skull cannot expand to accommodate the child’s growing brain — a serious birth defect called craniosynostosis that can cause mental retardation and even death.

With the goal of helping children with this dangerous and painful condition, scientists in the USC Stem Cell laboratories of Gage Crump, PhD, and Robert E. Maxson, Jr., PhD, pioneered a way to study craniosynostosis in zebrafish, as published in the journal eLife.

“Mouse models for this birth defect have already been developed,” said Crump, a professor of stem cell biology and regenerative medicine at the Keck School of Medicine of USC. “Our goal was to create a zebrafish model to better understand stem cell dysfunction in this disorder, as we can more easily manipulate and watch how skull development goes awry in this transparent vertebrate that shares many genes in common with us.”

In the study, first author Camilla Teng and her colleagues generated zebrafish with mutations in two key genes that underpin a common form of craniosynostosis called Saethre-Chotzen syndrome. They found that mutations in these genes — known as TCF12 and TWIST1 — can cause craniosynostosis in zebrafish, similar to mice and humans. In all three species, the mutations trigger the premature fusion of an important suture at the crown of the skull — aptly named the coronal suture. 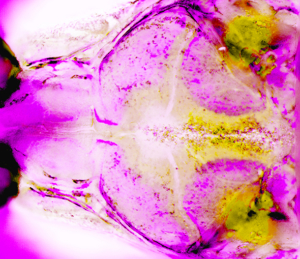 Teng and her colleagues observed these live transgenic zebrafish as they developed. Zebrafish lay and fertilize their eggs in the water outside of their bodies, and their embryos are completely transparent. Therefore, the scientists were able to observe details of early embryonic development that are obscured within the wombs of mammalian species, such as lab mice.

Using sophisticated imaging techniques, the scientists determined that stem cells, located within the sutures and responsible for skull growth, became abnormal much earlier in development than previously suspected. As a result, the stem cells fail to sustain their production of bone building cells called osteoblasts, disrupting the growth of the skull and its coronal suture.

“Babies with craniosynostosis often need multiple, risky surgeries to separate the skull bones,” said Teng, a PhD student in the Crump Lab. “Unfortunately, these bones often fuse again due to the underlying stem cell defects. In the future, we hope to use our newly gained knowledge to correct the underlying stem cell defect, thus reducing the number of corrective surgeries these babies will require.”