Researchers travel the road toward a cure for HIV/AIDS

Sometimes, wonderful things happen when scientists and the public get together to talk about research. All the jargon, all the technical language falls away, and it becomes instead a conversation between the two groups with the most at stake: the people in need of a treatment or cure, and the people trying to develop it.

Recently, the California Institute for Regenerative Medicine (CIRM) joined with the AIDS Project Los Angeles to hold a Town Hall event in West Hollywood called “HIV Matters: Countdown to a Cure: California Leads the Way.” About 120 people showed up to listen to stem cell scientists from USC, City of Hope, Calimmune and Sangamo Biosciences — all of whom are using CIRM funding to develop new treatments and look for cures for HIV/AIDS.

CIRM is funding three projects that have been approved for clinical trials and other research that is pushing the boundaries of knowledge in search of even better approaches.

As David Hardy, MD, the chief medical officer for Calimmune, said: “What is exciting today is that a cure is now something that can be talked about as a potential reality.”

After brief presentations to discuss their work and the science behind it, the panel opened the event to questions.

One of the first questions silenced the room. “Is death a possible side effect of these clinical trials?”

John Zaia, MD, the chief of virology at City of Hope and the lead investigator for one of the clinical trials, answered without  hesitation.

“Yes,” he said. “We do everything we can to limit all side effects, especially the most extreme ones, but we have to be honest with patients and explain it is a remote possibility. That’s why it is covered in the informed consent process that every person goes through before signing up for the trial. We want to make sure everyone completely understands what they are signing up for.”

During the session, Dale Ando, MD, chief medical officer at Sangamo BioSciences, talked about approaches that are currently being explored to kill the HIV/AIDS virus, such as “shock and kill,” a combination of drugs that flushes the virus from hidden reservoirs in the body and then provides a boost to the immune system in an effort to kill it. 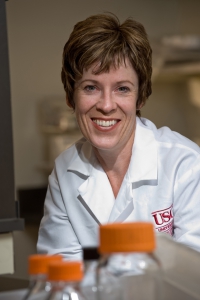 Paula Cannon, PhD, a CIRM grantee and stem cell scientist at the Keck School of Medicine at USC, talked about her research aimed at developing the next generation of stem cell therapy targeting HIV/AIDS.

Current approaches take blood stem cells out of the body, genetically modify them so they are resistant to the virus, then return them to create new blood and an improved immune system. Cannon’s work is going to try and do that inside the body, without the need to remove the blood stem cells. This is, in essence, copying what the AIDS virus does when it infects cells, but using that approach against it, creating a one-stop anti-viral approach to kill HIV.

It’s an audacious idea. But sometimes audacity is what you need to make big changes.

Moderating the discussion was Jeff Sheehy, CIRM Board member and patient advocate for HIV/AIDS. The evening ended with a tribute to people who have volunteered to be part of clinical trials.

“They know, particularly in these early stage clinical trials where the focus is just showing that this approach is safe, that they are not likely to experience any benefit themselves,” he said. “But they still volunteer, because they want to be part of something that could help many others. There’s a real sense of altruism. They want to advance the science.”