About to celebrate their 54th wedding anniversary, Grace and Ray Vagas weren’t going to let anything as bothersome as a hospital stay stop them. And neither was the staff at USC Norris Cancer Hospital, where Ray had been a patient for nearly a month after being diagnosed with leukemia.

When their son, Ray Vagas Jr., realized the anniversary was approaching, he knew he had to do something. He contacted the staff of the Patient Experience Program at the Keck Medical Center of USC. 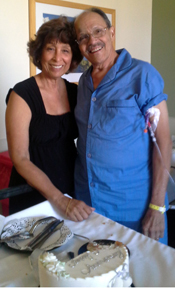 “I called them to see what we could bring in,” he recalled. “They said, ‘We’ve got it. We’ll do it. We’ll have staff come and bring them balloons.”
On June 20, Grace and Ray Vagas were surprised with a beautiful cake and some happy wishes from family and staff.

“They’re so loving and tight-knit,” said receptionist Laura Molyneaux, who organized the event for Patient Experience. “They take care of each other.”

For their part, the family couldn’t have been happier with how the party turned out. “You never expect that in a hospital,” Grace said. “You think they have more important things to do. But psychologically, something like this really helps.”

Anniversaries have always been a big deal for the couple. To mark the 25-year milestone, they gathered their original wedding party and re-created the ceremony — Grace even wore a wedding dress. And for their 50th anniversary, they went on a second honeymoon to Costa Rica.

“It was such a pleasure to have your group surprise you with a cake,” Grace said. “It was just lovely. It made a day that could have been sad very festive.”