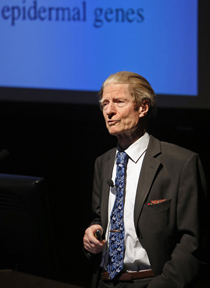 In his talk, “Nuclear Transplantation to Prospects of Cell Replacement,” Gurdon told about the advances made in the areas of cloning and nuclear transplantation since his discovery that mature cells can be reprogrammed to develop into different kinds of tissue.

His pioneering work continues to reverberate in the world of science. Although he did not mention it, Gurdon’s talk came the day after scientists announced that for the first time they were able to transform human skin cells into embryonic stem cells—a breakthrough that links directly back to Gurdon’s original experiments.

Gurdon was introduced by Andrew McMahon, director of the Eli and Edythe Broad Center for Regenerative Medicine and Stem Cell Research at USC, who called the Nobel Laureate a “scientist’s scientist.”

Gurdon touched on another milestone in the history of cloning—Dolly the sheep, which in 1996 became the first mammal to be cloned from an adult cell using Gurdon’s nuclear transfer process. That it took more than 30 years to accomplish indicates just how groundbreaking Gurdon’s efforts were.

Although Dolly died at about half the age of an average sheep, Gurdon called the cloning a success. He blamed the animal’s early death on it not being allowed outdoors to prevent it from being stolen.

“It lived for six years,” he said. “It was so precious they had to keep it indoors.”

As for the next breakthrough, Gurdon said he anticipates a therapeutic use to treat age-related macular degeneration. “An eye could be easier to restore than other organs like the heart or liver because it needs relatively few cells—about 10,000—compared to millions,” he said.

“This is remarkably reversible,” he said of the leading cause of blindness in older people.

But there are still hurdles to be cleared. Much of the process of how and why cells can transform remains mysterious even while progress is being made.

“Our aim was and still is how this rejuvenated programming is happening,” he said.

The day after his speech, Gurdon received an honorary degree from USC during commencement.

After presenting his public lecture, Gurdon was interviewed by Madeline Andrews, a Ph.D. student who conducts stem cell research. For the full interview, visit usc.edu/13t.