Last August, the Davila family was given devastating news: Children’s Hospital Los Angeles (CHLA) cardiologists confirmed that their 27-week-old fetus suffered from hypoplastic left heart syndrome (HLHS) with restrictive atrial septum, which prevented blood returning from the fetus’s lungs from circulating back into the body

The parents were told that their child, when born, faced open-heart surgery. Even worse, babies born with this rare condition have a 50 percent neonatal mortality rate. 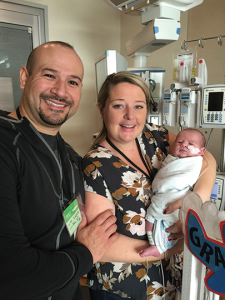 But the Davilas had another option — a fetal cardiac intervention procedure in utero that would increase the odds of the child’s survival when the open-heart surgery took place. The procedure would be coordinated by fetal therapy specialists from the CHLA-USC Institute for Maternal-Fetal Health.

On Sept. 9, the physicians gathered to perform an in utero atrial septal stent procedure to open the atrium, allowing blood trapped in the lungs and left upper heart chamber of a HLHS fetus to flow back to the right side of the heart. The successful procedure was a first for the Institute for Maternal-Fetal Health and a first for a Southern California hospital.

The fetal interventionalist conducting the procedure was Ramen Chmait, MD, director of Los Angeles Fetal Surgery, a branch of the CHLA-USC Institute for Maternal-Fetal Health. Chmait guided a needle into the heart of the fetus in the mother’s womb. Pediatric interventional cardiologist Frank Ing, MD, co-director of the CHLA Heart Institute, then deployed a stent device in the developing child’s heart. CHLA fetal cardiologist Jay Pruetz, MD, used ultrasound to guide the physicians’ movements.

“This procedure contributed to Grayson’s ability to survive after his birth,” Chmait said. “It successfully strengthened his lungs so the surgeons could do their job after he was born.”

Doctors closely followed mom Samantha Davila, a program manager at an aerospace and defense company, to ensure the stent in the baby’s heart was working properly. By the time the stent appeared to close down in the late third trimester, Grayson’s lungs had strengthened during a critical window of gestation. Grayson was born on Nov. 19 at 8:29 a.m. via a planned cesarean section, ten weeks after the procedure.

Following his delivery, Grayson was immediately transported to CHLA, where Starnes’ pediatric cardiothoracic surgery team performed a Norwood surgery, which uses the right heart and pulmonary artery to become the main pathway for pumping blood to the body.

“This coordination of care between the fetal therapy team and CHLA surgeons was extraordinary, starting with the transcatheter fetal cardiac procedure, the monitoring during the pregnancy leading up to the birth, and the surgery,” Starnes said.

Grayson was discharged from CHLA on Dec. 14 and went home with his thrilled parents.