JAMA Ophthalmology, one of the journals of the American Medical Association, announced four of its top 10 most talked about articles in 2016 are published research by the USC Gayle and Edward Roski Eye Institute.

The four articles include National Eye Institute-funded research led by principal investigator, Rohit Varma, MD, MPH, dean of the Keck School of Medicine of USC and director of the USC Roski Eye Institute. The research articles include: Visual Impairment and Blindness Will Double by 2050; The Los Angeles Latino Eye Study (LALES), which was the first and largest to study the relationship between age-related macular degeneration (AMD) and quality of life; Chinese American Eye Study — Prevalence of Diabetic Retinopathy (part of CHES Study); and Chinese American Eye Study — Prevalence of AMD (part of CHES Study). JAMA Ophthalmology used Altmetric to determine the Top 10 list of most read articles. Almetric provides a quantitative measure of the attention each scholarly article receives in traditional and social media. 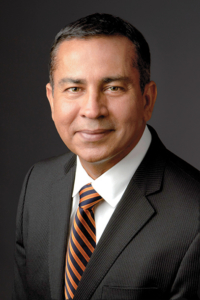 “It is truly gratifying to know that our research is resonating with scientists, ophthalmologists, policymakers and the media who look to JAMA Ophthalmology as an indispensable source of ophthalmic knowledge,” said Varma, one of the world’s leading experts in population-based eye diseases. “Our research provides a better understanding of the burden and impact of potentially blinding eye diseases among an aging population as well as how to avoid a ‘one size fits all’ approach to understanding eye diseases among different racial/ethnic populations.”

The Visual Impairment and Blindness Will Double by 2050 Study found that over the next 35 years, the number of Americans with a variety of eye disease and impairment issues, including AMD, glaucoma, diabetic retinopathy (DR) and cataracts, will dramatically increase impacting both individuals and society. More than 16.4 million Americans over age 40 will have visual impairment due to uncorrected refractive error compared to 8.2 million in 2015. In addition, more than 2 million age 40+ will be blind and 6.95 million will have visual impairment by 2050 compared to 1.02 million and 3.22 million respectively from 2015. The study also found women and minority populations, especially Latinos, carry the largest burden.

The CHES studies were the largest ophthalmology research conducted among those with Chinese ancestry living in the U.S. Key findings of the CHES study on age-related macular degeneration point to a higher percentage (85 percent) of neovascular or “wet” AMD than geographic atrophy or “dry” AMD (15 percent). This is almost the opposite of what has been found among white people or other ethnic groups who typically have the same percentage of AMD types or higher prevalence of dry AMD. The CHES study on diabetic retinopathy found the prevalence for this disease in the Chinese American participants is relatively lower than studies of Chinese individuals residing in rural northern China or Latino individuals from Los Angeles County.

The LALES Study was the largest population-based study of adult Latinos and age-related macular degeneration (AMD) and the first to analyze the risk and prevalence of early- and late-stage AMD and its impact on quality of life for older Latinos. The study found Latinos diagnosed with bilateral AMD with large drusen (the lipids or fatty proteins that are yellow deposits under the retina) and depigmentation as well as a more severe AMD had a substantially lower health-related quality of life as compared to those with AMD lesions in only one eye. In addition, the findings point to a more significant health-related quality of life decline beginning in early rather than later stages of the disease.