The weather was gray outside Galen Center on Saturday, May 16, but inside it was bright with cardinal and gold as MD and MD/PhD graduates buzzed with excitement during commencement ceremonies for the Keck School of Medicine of USC.

Just before 3 p.m., the 168 medical degree recipients donned red caps and gowns, exuding pride as they readied themselves to march into the arena to the tune of pomp and circumstance.

“It’s an amazing day,” said MD candidate TC Scotton, who will attend the psychiatry residency training program at the Semel Institute for Neuroscience and Human Behavior at UCLA this summer. “Today is the culmination of four long years of hard work and sacrifice. Seeing my classmates and their families all dressed up today puts it all into perspective.” 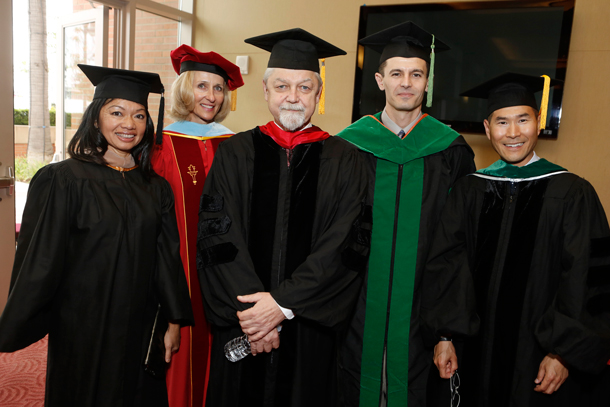 Carmen A. Puliafito, MD, MBA, dean of the Keck School, opened the ceremony by congratulating the Class of 2015 and acknowledging key faculty members. He also acknowledged the six staff members from the Keck School and Los Angeles County + USC Medical Center who recently traveled to Nepal to provide medical aid following the devastating April 25 earthquake.

“These extraordinary individuals are role models for our medical students because they show the importance of community service on a global scale,” said Puliafito. 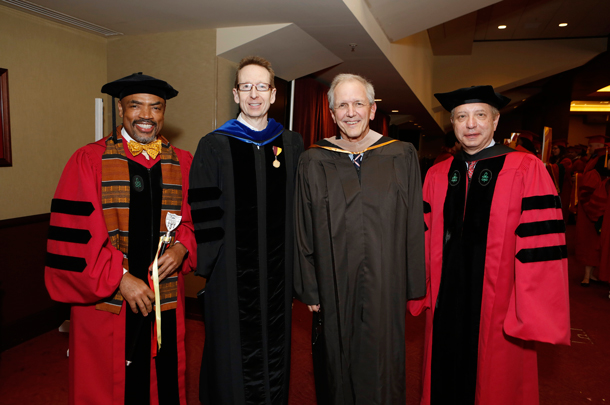 “Both of our professions involve a sacred trust,” said Gibson. “Journalists give a voice to those who might not otherwise be heard. As doctors, you have the sacred trust of caring for people. Giving them the health they need to be as productive as possible, as contented as possible, as hopeful as possible, and as fully realized human beings.”

Most of Saturday’s graduates received MD degrees, but five earned an MD/PhD degree, two earned an MD/MBA and one earned a MD/MPH.

Other health and medicine commencement ceremonies had taken place throughout the week.

On May 13, the Keck School awarded 173 master’s degrees in a variety of biological and biomedical fields, 132 master’s of public health degrees, 43 PhD degrees and four master’s of academic medicine degrees.

Dean Puliafito also gave welcoming remarks during this ceremony, followed by a commencement address from Keith R. Yamamoto, PhD, vice chancellor for research at the University of California, San Francisco. Yamamoto encouraged graduates to take risks in their careers.

“The conventional wisdom is to play it safe, hold back and wait until you’re established to take risks, but I disagree,” said Yamamoto, who is also executive vice dean of the UCSF School of Medicine. “Seek out risk. Seek out adventure with a capital ‘A’. All of the great results that make science exciting come shrouded in risk because there are no sure things among interesting things. So, just like the Nike ads say—‘Just do it’.” 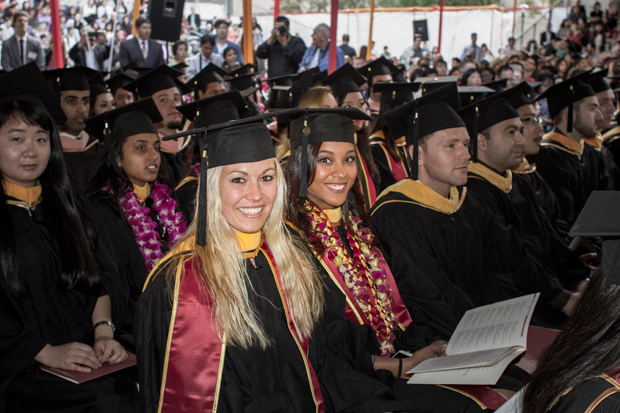 ROTC scholar Christine Hogan was among those who received a PhD, MPH or MS degree on May 13 from the Keck School of Medicine of USC.

In the audience was Christine Hogan, an ROTC scholar who earned a master’s degree in pathology while training for the military. As a soldier-student, a typical day for Hogan included early morning workouts with the Army, attending classes for both Army and USC courses, followed by evening shifts at Children’s Hospital, Los Angeles, working in the laboratory of Yves DeClerk, MD. After her six-year contract with the Army, Hogan plans to attend medical school and pursue her goal to become a global leader in health care.

“People ask me why I am going into active duty rather than work in a lab or in corporate America. But I believe that nothing is more important than serving our country as a medical services officer in the United States military,” said Hogan, who has been selected to be trained as a medical evacuation pilot and fly Blackhawk helicopters. “Life is too short not to pursue your dreams and do what you want to do.”

On May 15, additional health-related ceremonies took place, many in conjunction with commencement at the University Park campus. 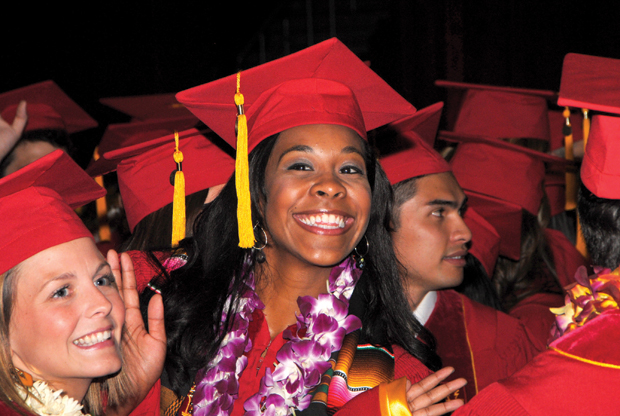 Soon-to-be MD Jazmin Cole is all smiles during the Keck School commencement. 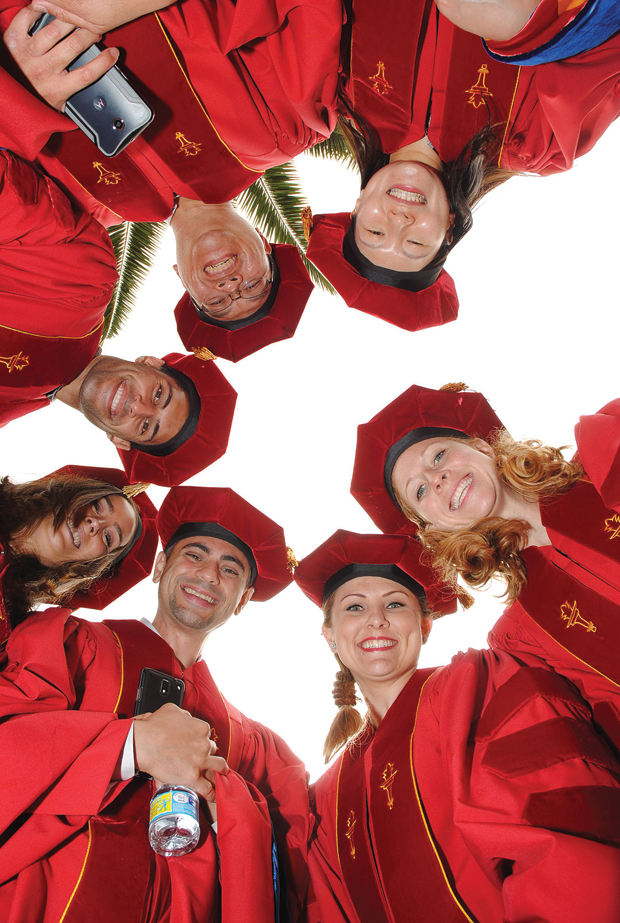 Biokinesiology and Physical Therapy Division graduates circle up to celebrate. 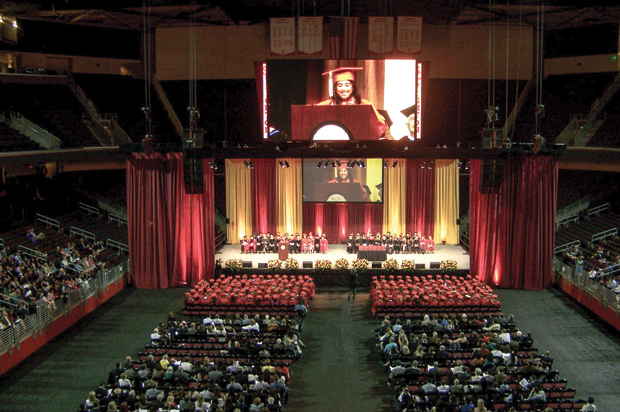 Co-class president Reem Itani delights the crowd with observations about a medical education while giving the student address at the MD and MD/PhD commencement. 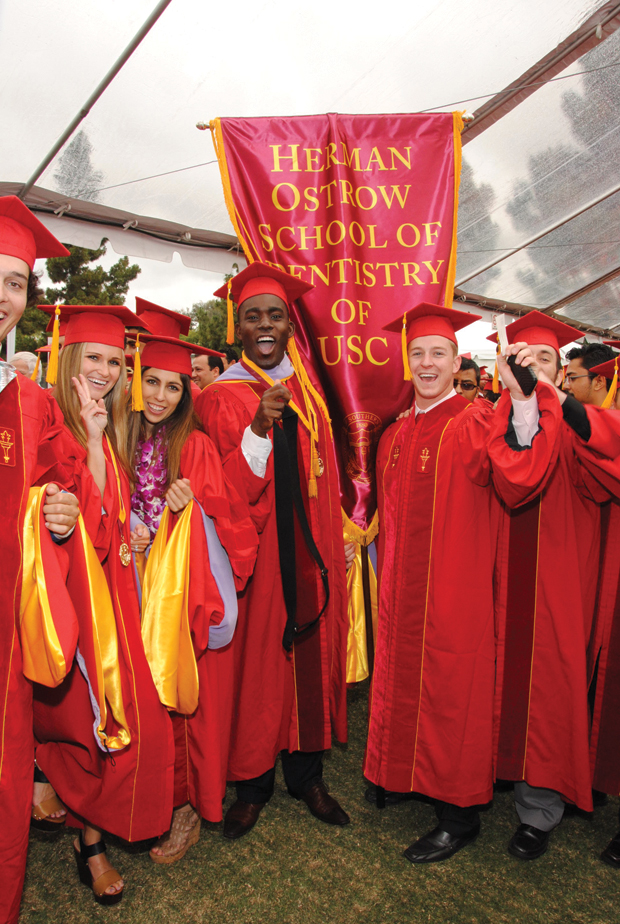 The Herman Ostrow School of Dentistry granted a total of 281 degrees at its May 15 commencement. 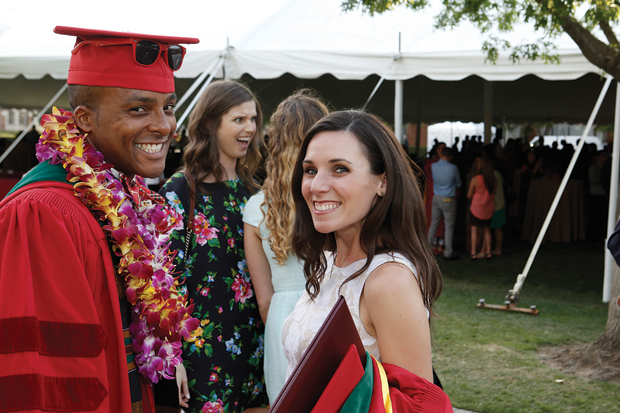 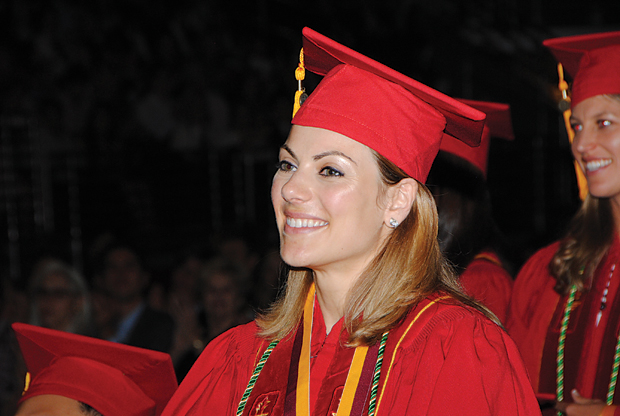 Mariya Kalashnikova beams as she is recognized for her academic achievements during the commencement ceremony on May 16. 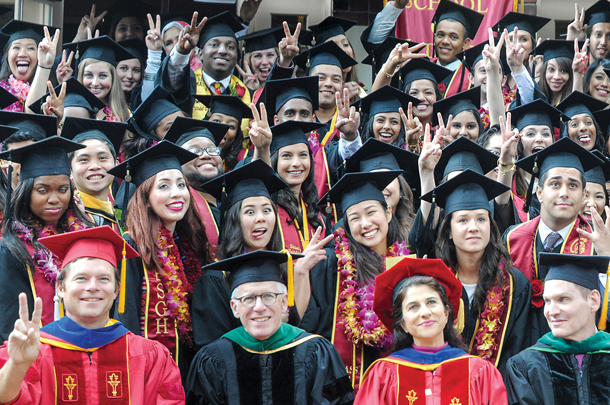 Graduates in the Health Promotion and Disease Prevention and Global Health programs let their emotions show in a May 15 group photo with faculty. 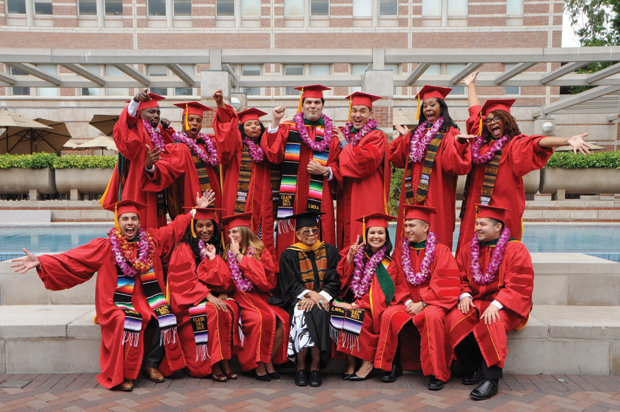 Dean of Diversity Affairs Althea Alexander and new MD recipients celebrate after the May 16 commencement. 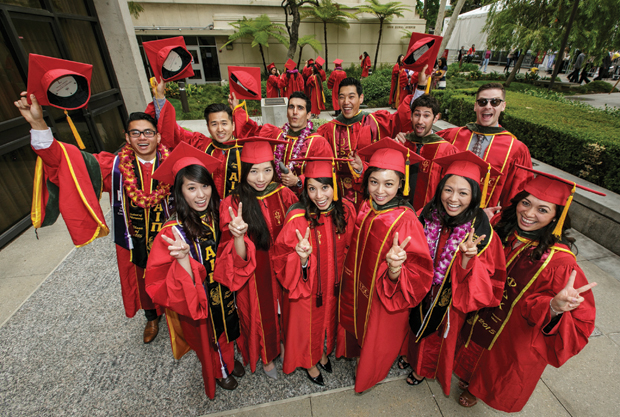 School of Pharmacy graduates show their Trojan Pride on May 15 as they prepare to receive their diplomas. 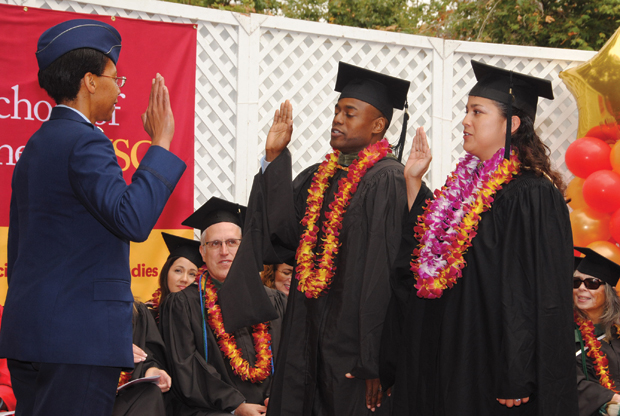 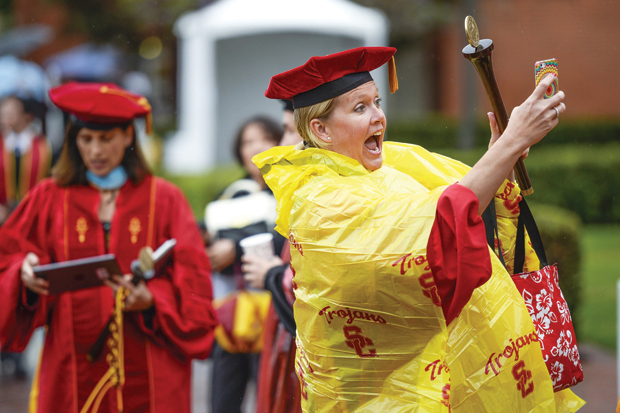 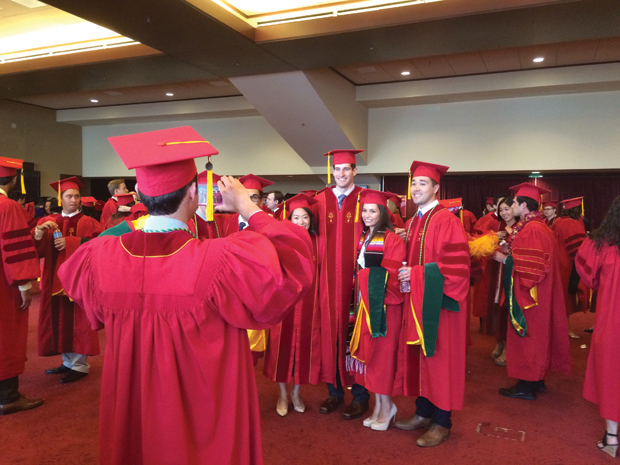 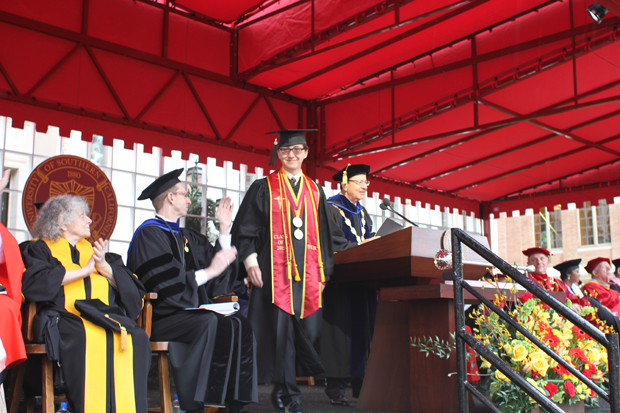 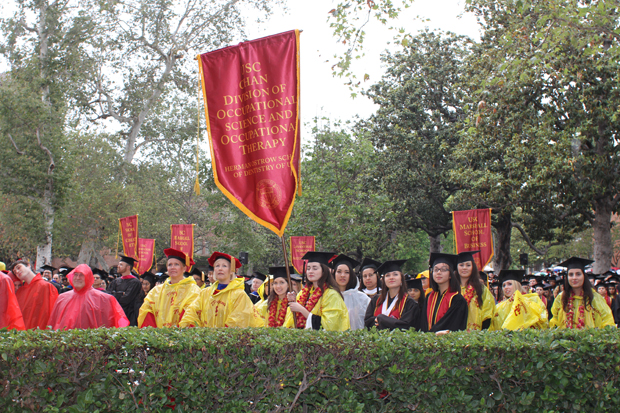 Graduating students in the Occupational Science and Occupational Therapy program at the May 15 commencement in Alumni Park. 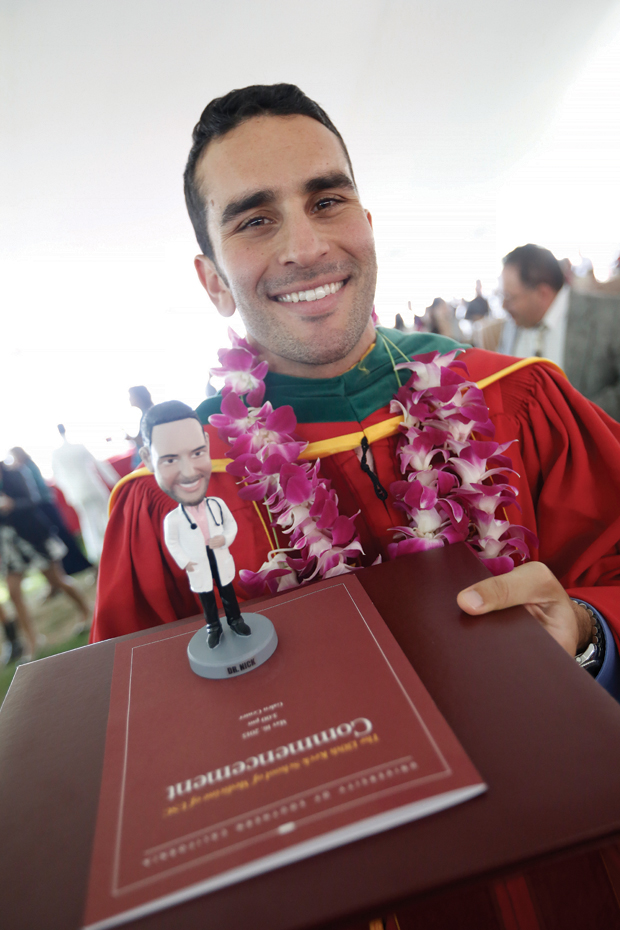